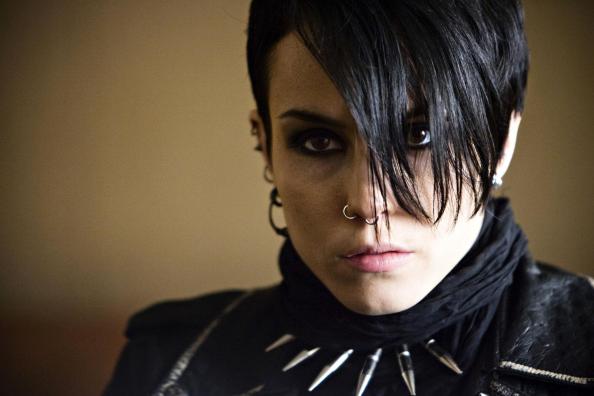 The left-wing Swedish author Stieg Larsson had a strange and remarkable life. As a teenager, he witnessed some of his friends commit gang rape, and was haunted thereafter both by guilt about his failure to intervene and the omnipresence of violence against women. As a journalist he was unknown outside of Sweden when he died suddenly at the age of 50, but soon became one of the most widely read authors on Earth when his Millenium triology was posthumously published. The first filmed adaptation of Larsson’s crime novels is the unforgettable 2009 Swedish television mini-series Män Som Hatar Kvinnor.

Though known as “The Girl with the Dragon Tattoo” to Americans, the original Swedish title actually translates as “Men who Hate Women”, which better describes what this film is about: a ferocious, unforgettable, superheroine battling some of the slimiest and scariest misogynists in film history (which is saying something).

Noomi Rapace knocked the film world on its ear with her four-barreled performance as Lisbeth Salander, a social misfit with a history of trauma, a genius for computer hacking, and an invincible survival instinct. Events bring Salander together with crusading journalist Mikael Blomkvist (Michael Nyqvist, nicely underplaying his part), who is attempting to solve the long-ago disappearance of a little girl in a remote Swedish village that is icy in more ways than one. Along the way they encounter enormous human ugliness (almost all of it male), perplexing clues, and life-threatening risk.

Having not read Larsson’s books, I cannot evaluate the faithfulness of Rasmus Heisterberg and Nikolaj Arcel’s screenplay to the original story. But I certainly aver that it’s a fine bit of writing, rounding out each character and having them bounce off each other in ways that advance the story. The relationship between Salander and Blomkvist is particularly refreshing because it completely reverses the gender role conventions of the genre. The mystery/thriller elements are also fairly well-done, keeping the audience puzzling over the solution at times and on the edge of their seat at others.

As photographed by Eric Kress, Northern Sweden is a bleak and lonely physical environment populated by bleak and lonely people, amongst whom some true monsters can easily hide. The film could easily have been a downer if not for the breathtaking power of Salander’s character and Rapace’s performance. Multi-layered female roles are sadly uncommon in movies; the worldwide embrace of Lisbeth Salander shows that audiences are hungry for more.

p.s. This review is based on the 180 minute version that played on Swedish television (later edited down into a shorter film for release in theaters). The 2011 English-language remake has a bigger budget with bigger stars (including a miscast Daniel Craig as Blomkvist) and is certainly a polished piece of work, but not quite as effective as the original.